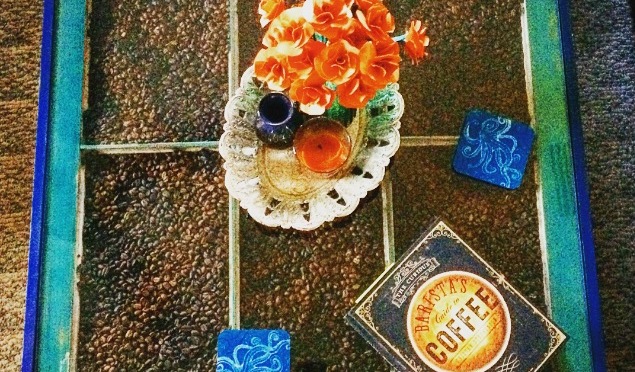 Growing up on the Outer Banks of North Carolina, I was always surrounded by creativity. The Outer Banks is home to a creative community and spirit that hold the island captive. We have even created our own time table, island time!

Another thing the island has in spades is great coffee shops! From Ocracoke Coffee Co. to Treehouse Coffee in Duck, and the plethora in between, the coast is covered when it comes to your caffeine needs.

One of my favorite places to go and write, where creative juice was served as soon as you walked in the door, was The Coffee House Downtown, in Manteo. The coffee house, sadly, is no longer with us, but the memories of the coffee table they had there inspired the one I am about to share with you!

It was a simple enough coffee table, brown wood, held up by legs, with a couple sheets of glass on the top. The great part, though, was within the shadow box they had poured a few coffee beans. They had made it a literal “coffee” table. Of course, I couldn’t just leave it there. I had to take it up 100 notches. So here, is my version of a literal “coffee” table.

My dad was helping a friend clean out a barn on the mainland. He would come home on weekends, and I would always get to hear about his great finds that week. My first question was always “did you bring me a window?” He always promised he would, and kept telling me that there were several in the barn, but he kept forgetting. Eventually though, he brought me the promised window. It was missing a few panes of glass, and was perfect! As soon as I saw it I knew, this was the beginning of my own coffee table.

The window obviously needed a little work before it could be a functional piece. I removed the glass panes, glued where it was coming apart and tied it with lacing chord to hold it until it dried, and sanded the sucker down until it was smoother than a babies butt. I left some of the original white paint, for later distressing, and phase one was complete.

Next, since I was going for a boho look, I went bold with my color choices. I also wanted it to look distressed, so I covered some of the white old paint I wanted to show through, and some of the natural wood with coconut oil. Then I painted the window a bright teal, which is all over my house in various pops!

Once the paint dried, I sanded it again, a bit more gently this time. The places where I had put the coconut oil came right off revealing the undercoats. I repeated the coconut oil- painting- sanding process a few more times for a more layered look. Eventually I ended up with this:

Next, I needed to make it an actual table. I added a nice strong sheet of wood to the bottom, drawing an outline of the window (since it wasn’t perfectly rectangular) and cutting the board to size. I nailed it every six or so inches.

Then, since this box was going to be holding pounds and pounds of coffee, I added extra support beams on the sides and in the center to make sure my table wouldn’t “bottom out” (I used a drill and screws for these, I wanted to make sure they went all the way through into the window and wouldn’t go anywhere).

I was also able to save the legs off an old side table that my dad had retrieved from the burn pile as well! Yay for free stuff!

Forgive the mess of our workspace!

I needed to cover up the edges. Not attractive, with all the layers of window and wood. So I thought, what better boho way, than with a decorative molding? So off to Lowes I went. And I found this beauty:

Which if I’m honest, I would put through my entire house if I could afford it. This was the splurge of the table. But with the detailing already done, and sparing me that kind of wood work, I thought it was worth it!

So we cut the molding on 45 deg. angles into four pieces (with a little left over) and tacked it around those edges. We left it a ¼ inch above the top surface of the window since I was going to put a ¼ slab of glass on the top and I wanted it to be flush. Then I filled in the tack holes with nail putty and let it dry. I sanded down any bumps, then was ready to paint.

Now, back to those bold colors. For the molding and legs I went for cobalt blue and orange. I wanted it to have a surfer/islandy/boho feel, I live on an island after all…

I decided to use antiquing glaze on the molding and legs so it looked older like the window. This brought the details out of the molding beautifully! It also covered up where I didn’t have the steadiest hand when I was painting the blue and orange. Yay for caffeine shakes!

To make it all cohesive, I antique glazed the window to match the molding and legs. I did clean it up a little more after I took the picture, but here is a before and after:

I painted the legs orange to bring out the detail of the orange in the molding. Then I antique glazed them, too.

The part I had been waiting for, for years! The coffee beans!

I wanted to do more than just sprinkle a few beans into a shadow box.

I had been a barista for 8 years at this point, and had fallen in love with coffee. Different roasts of coffee are like having different kids. They come from the same parent, but they all have their own personality (their own flavor and smell and color)!

I decided to go a little whimsical and do a design within the beans themselves. I would pour in dark roast coffee to fill the window panes, and then carve out a swirly design and fill it in with blonde roast.

Luckily for me, when you work at Starbucks, you get a pound of coffee a week for free as a markout. Talk about benefits! Now, after drinking coffee at work all day I would have overdosed to have drank a pound a week at home in addition to all of that. Heart palpitations! So I set aside bags like a hoarder. So even the coffee to fill my table was free!

(If you’re paying for the coffee for a project like this, it doesn’t need to be Starbucks. Folgers or something cheaper will work just fine)

I got a local glass cutter to cut a custom sheet of glass for the table top since it was a little wonky shaped and not a perfect rectangle. He nailed it! It fit like a glove! This was another splurge, but if I wanted this table to be level and last, it needed to be done.

A note: When I move, I will be taking the glass off and the beans out. At that time, I plan to remove all the blonde roast beans and spray paint them either copper or gold so that the contrast between the roasts is a little more apparent. (You can also choose to spray paint your beans a color!) You get the general idea. If the lighting is good, you can see the design no problem! If it’s dark, its way more subtle.

I decorated the surface with Octopus coasters in cobalt blue (from an art gallery on Ocracoke Island), an engraved silver tray (I purchased on Portobello Road in London), a teal fleur de lis vase (I got at a shop in Knoxville TN), an orange pumpkin spice candle for fall, and a small black and blue vase (may have come from the dollar tree? I have no clue…).

I wanted the nicnacks on the table to mean something, just like the table did. I also like layering heights with décor (short fat candle, thinner/taller small vase, and a large vase—all of which pull colors from the table in sticking to the blue, orange, and teal family) and I usually stick to odd numbers (hence the three items in the tray).

Also sorry about the tubs and owl sheets on the sofa, I had company when I finally finished the project!

When it is in its final location, it will be on an antique looking teal rug, in front of a hand carved wooden day bed. Couldn’t get any more boho, unless I added pink  😉 but I’m not a fan of that particular color  😛

If you have any questions about the process or materials, ask in the comments, and I will do my best to get back to you in a timely manner!