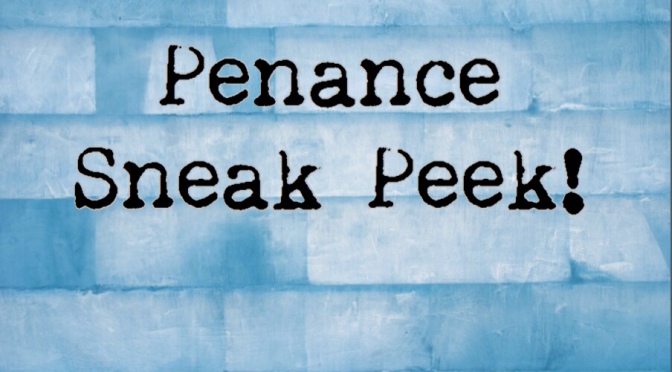 Here you go guys! Your first glimpse into Penance, book two of The Kingdom Come Series!

If you haven’t already read the first book, Transgression, it is available right here!

The initial sting of the ice had subdued into a chilled numbness. Achaia’s jaw was beginning to hurt from clenching her chattering teeth, and her shoulders and upper back were sore from shivering so violently. Her lips were so chapped they burned, as they cracked and bled. She could taste the blood when she licked them. She had chewed her bottom lip raw, anxiously waiting for something, anything, to happen next. The waiting was killing her.

Achaia strained her ears for any sound. A distant set of footsteps echoed down what sounded like a tunnel. They were coming closer. They grew louder as they approached. Each ringing step raised the hair on the back of Achaia’s neck. She sat frozen, waiting to see if they would pass by, when they stopped. With the sound of cracking ice, her cell door slid open. In the doorway, black hair spiked out in all directions in an intentional mess, his bright blue eyes sparkling at her, stood Luc.

“Hello, Love,” he smiled, his lips shimmered like melting ice, and though they were cracked, were smooth and didn’t look alive enough to bleed. He looked like a beautiful moving ice sculpture. “Did you miss me?”

Join Achaia, Shael and the others in the second installment of The Kingdom Come Series, coming late 2018! Pre-order your copy today!